On 10 July 2015, on a special ceremony, in the presence of the Government of Federal Republic of Ethiopia, ambassadors accredited to the country and representatives of different international organization, H.E. Hailemariam Desalegn-Prime Minister of Ethiopia received the Romanian Parliament Medal for his outstanding merits in international diplomacy and in obtaining for his country the accolade of WORLD BEST TOURIST DESTINATION and the sobriquet of FAVORITE CULTURAL DESTINATION. 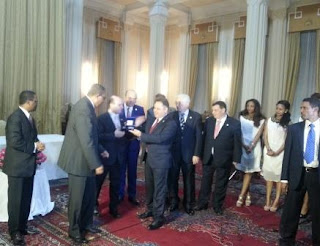 The Romanian Parliament Medal was entrusted to the leader of Ethiopia for his record in promoting peace and international cooperation by tourism promotion, fostering development in his country and promoting Ethiopia as a world leader in tourism, culture and heritage protection.

We must also mention that senator Ionel Agrigoroaei was elected in 2013 and 2014 as leader of activity of Romanian Parliament for his profusely activity on parliament arena. 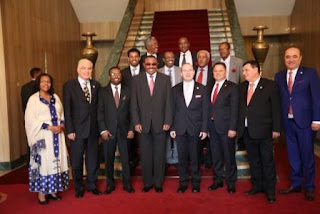 
The latest world international personality, receiver of Romanian Parliament Medal was Minister of Foreign Affairs of Kazakhstan-H.E. Erlan Idrissov for his role in promoting free and fair international election monitoring into his country, the proposal and the final decision was taken by European Council on Tourism and Trade President Professor Dr. Anton Caragea.
Posted by Global Tourism Institution at 02:30