DALI HAUTE PARFUMERIE IS CROWNED AS WORLD FAVORITE PERFUME IN 2017

On the occasion of Europe Day 2017, France has received a new recognition as the center of world culture and lifestyle with the title of CREATOR OF WORLD FAVORITE PERFUME being saliently ascribed to DALI HAUTE PARFUMERIE.

The Perfume is from 17th century onwards an intricate part of European culture and must be inscribed as a part of tourism development as tourists are attracted by magic places where perfume is made and by perfume artists.

Today the quest for exclusive perfumes, for the secrets of the perfume creators has a new address: Dali Haute Parfumerie, World Favorite Perfume in 2017, based in Paris.

Dali Haute Parfumerie has just being honored with the title of World Favorite Perfume for 2017, in appreciation of his original interpretation of exceptional jewels created by Salvador Dali from which aroused the inspiration for creating unique perfumes, carved by the world famous perfume maker: Alberto Morillas.

Dali Haute Parfumerie has being inspired by the jewels collections created by the artist and now the exceptional perfume bottles are transformed in works of art, the jewels on the cap have to be preserved and kept in house for generations to come.

It was Mr. Jean-Pierre Grivory, President Director General of Cofinluxe that harbored the bold idea to launch a new luxury perfume brand, based on the artistic creations of Salvador Dali.

But the magic doesn’t stop at the bottle!

The perfume bottles of Dali Haute Parfumerie are the chalice that is protecting the fragrances carved by one of the world`s best perfume artists, fragrances that will invite you on a voyage across the essences of life.

Inside every Dali Haute Parfumerie fragrance you will find the rarest raw materials and substances in the perfume industry ranging from: absolute ambrette, orange blossom absolute, musk, patchouli of Indonesia, ylang-ylang, so many natural aromas and essences that will instantly transport you in a oneiric voyage.

In the official letter penned for Mr. Jean-Pierre Grivory, President Director General of COFINLUXE (the parent company of Dali Haute Perfumerie)on May 9, 2017, on Europe Day and announcing Dali Haute Parfumerie as World Favorite Perfume in 2017 is noted that:

«Starting today DALI HAUTE PARFUMERIE is receiving the precious recognition of quality for cosmetics and perfume’s industry and a sign of trust on international markets as the WORLD FAVORITE PERFUME FOR 2017.

On May 9, on the EUROPE DAY, when we are celebrating the values of our continent and all that our peoples are producing and in the presence of diplomatic corps accredited to our institution we have publicly signed the decree conferring the official title of WORLD FAVORITE PERFUME FOR 2017 to DALI HAUTE PARFUMERIE.

From today DALI HAUTE PARFUMERIE fragrances will be used for protocol gifts, product tasting, for brand presentations, for international delegations and international events related to tourism, trade and diplomacy across the world, promoting Europe industriousness, innovation spirit and cultural prowess.

European Council on Tourism and Trade proudly crowned Dali Haute Parfumerie for the unique and astute spirit of promoting the European, but also universal values of Salvador Dali creations and encapsulating in his perfumes the French spirit, the European culture and the magic of a great perfume artist Alberto Morillas».

For orders and special request kindly consult the list of Official Distribution and Partners of DALI HAUTE PARFUMERIE or contact direct Orders Department at: +33 1 55 37 71 72

Posted by Global Tourism Institution at 12:14

Posted by Global Tourism Institution at 03:09

The 2017 European Day ceremony was officially opened with the traditional cake-cutting by President Professor Dr. Anton Caragea together with Academician Mircea Constantinescu, and High Commissioner for Tourism, Mr. Mark Doda as well as all ECTT accredited ambassadors in Bucharest.

The reception was attended by over 1000 people from including prominent guests such as government representatives, diplomatic corps in Bucharest, business leaders, academia, and the media.

The guests where welcomed on the premises by H.E. President Dr. Anton Caragea, European Council on Tourism and Trade leader who seized the moment to make a presentation of Europe`s role in today`s world.

Excellencies, Members of the Diplomatic Corps,

Namaste, Salam Alaykum, Good evening, Bonsoir, and a very warm welcome to you all to the 2017 Europe Day celebrations.

First, I would like to express my gratitude to Academicians Mircea Constantinescu and Ionut Costea, Directors of EUROPEAN TOURISM ACADEMY, for kindly agreeing to make available this splendid hall for today’s gathering.

We thought that this year it would be great to bring Europe closer to academicians and professionals and leaders of all walks of life, and to hold our celebrations in this excellent establishment.

Thank you very much to everyone who has worked so hard to make this happen.

On this day in 1950 Robert Schuman, the French Foreign Minister, called on the nations of Europe to unite and make war on our continent unthinkable.

His message of peace and unity is as relevant as ever.

The dreams of our founding fathers have become a reality, and Europeans live together in peace and prosperity, bound together by principles of democracy and human rights.

Yet, as anyone who follows international news knows, the European Union faces considerable challenges, and I do not want to gloss over these.

But despite all our difficulties the Europe represents the most successful process of regional integration, and remains the richest continent in the world.

Everywhere in the world Europe is a major trading partner, a major investor and we are proudly launching here BEST OF EUROPE/BEST OF WORLD program.

Climate change is another example of Europe prowess and a dear subject to myself as Ambassador for World Protected Areas .

On 22 April 2016, 175 countries signed the Paris Agreement in New York. Fifteen countries deposited their instruments of ratification on the same day sending a signal to the international community on the paramount importance of the implementation of the Agreement.

Our Ambassador office is committed to continue to work closely with all the nations on climate change, not only alongside it in international negotiations, but also as a key partner – providing support for mitigation and adjusting, and on the implementation of the Paris Agreement – the next big challenge.

I want to welcome you this evening not only to the Europe Day Reception, but also to our exhibition showcasing our engagement in tourism, trade and development across the world.

With WORLD BEST TOURIST DESTINATIONand WORLD CAPITAL OF CULTURE AND TOURISM programs we succeeded in the last ten years to bring over 6 billion euro investments in tourism, development and growth sector in Africa and Asia and we created more than 100.000 jobs in tertiary sectors of all the countries that have being supported by EUROPEAN COUNCIL ON TOURISM AND TRADE and EUROPEAN TOURISM ACADEMY programs.

I would like to thank all our development implementing partners for their contributions to the exhibition and for their efforts.

I hope that everyone will take time to discover the breadth and depth of the EUROPEAN COUNCIL ON TOURISM AND TRADE co-operation with developing world.

I would like to express my gratitude in particular to key partners of ours in this day, as DALI HAUTE PARFUMERIE who offered you not only wonderful gifts but provided you with a symbol of what Europe stand`s for culture like Salvador Dali works and the joy of living embodied by wonderful perfumes and also a word of gratitude to our European Diplomatic Wine`s partners like HOUSE OF PANCIU who unveiled for you the best European sparkling wines and HOUSE OF WINES COTNARI who had offered you the gift of incredible European wines.

A word of gratitude to the 23 masters of pastry and cakes, who created the incredible cakes that we will taste tonight.

I will no longer stay between you and the incredible cake awaiting us!

Posted by Global Tourism Institution at 03:03

European Council on Tourism and Trade (ECTT) hosted the first ever European Cigars Exhibition in Brussels with the aim of bringing together the European cigars lovers with world top cigar producers.

As Europe emerges out of the crisis, we must not forget that our continent is the main consumer of cigars in the world and cigar is part of the lifestyle and joie de vivre that is representative of our continent.

Europe must influence,  educate and leverage his financial and taste on world cigars community. 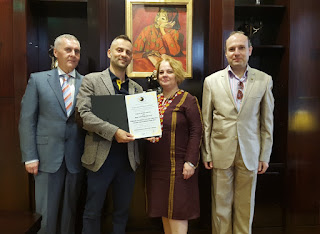 On the meeting agenda was also on the most sought after moment: tasting of world's best cigars deemed as representative for a cigars aficionados paradise.

The winner was unanimously branded as La Galera 80 years anniversary limited edition crowned as Favorite Cigar for 2017 and Tabacalera Palma from Dominican Republic.

If Dominican Republic took the podium with Palma and La Galera as World Favorite Cigar,  Nicaraguan products also fired up the world's attention followed closely by Cuban and a host of small Mexico and Brazil producers.

The Director of European Cigars Exhibition in Brussels, Mrs. Ruxandra Leonte stated:  We hope to make the Cigars Exhibition a yearly event representative for world producers and European consumers and also support a tourism products based on tobacco discovery as we already have at world level well established and running wine tourism tours.

I congratulate the winners of this year edition of World's Favorite Cigar producer Tabacalera Palma and wish everybody to taste the magic La Galera cigars blended by talented and energetic Jochy- José Arnaldo Blanco III and his team.

Pavel Avramoiu, hotel and hospitality delegate  also praised the initiative: representing a chain of 80 luxury hotels across the world, the opportunity to meet in one place the most important representatives of cigar industry is priceless. I also concur to the strong showing of Tabacalera Palma and Dominican Republic cigars and I hope we will soon have La Galera collection in our hotels.

Tabacalera Palma’s emergence predates to the mid 19th century, when a Spaniard named José Manuel Blanco Lozada moves to the Dominican Republic and pursues the trade of tropical fruits and tobacco.

José Arnaldo Blanco II established Tabacalera Palma back in 1925 and filed for industrial registration in 1936, becoming one of the first cigar manufacturers in the Dominican Republic. By 1960, ‘La Palma’ had developed to have around 200 full time rollers generating cigars for the local market.

Today the family business is lead into a new adventure by José Arnaldo Blanco III, affectionately known to all as “Jochy”, who  is the current owner and CEO of Tabacalera Palma.

Tabacalera Palma is a vibrant enterprise with a positive impact to the community. Not only does the company contribute with the direct employment of many citizens, but commits with society by supporting existing charities like the Firemen Patronage, the Orphanage of Tamboril, several sports organizations, amongst others.

The company employs more than 350 persons on site, more than 70% of them being women, indirectly employing more than 1,500 with all of the operations.

Jochy devotes unconditional support towards small and independent growers in the communities where Tabacalera Palma operates, as well as portraying a partnership in the state of the art tobacco farm “Estancia Flor de Palma”, with the world-renowned cigar maker Litto Gomez from La Flor Dominicana.

Some of the finest tobacco in the world is produced here, from the flavorful fillers and the delightful binders, to the exquisite wrappers of the uttermost quality.

Ever since Mr. Blanco assumed the role of CEO in Tabacalera Palma, the company has developed numerous private labels for some of the leading cigar companies in the world.

To order the WORLD FAVORITE CIGARS FROM PALMA you can contact the factory  here:

Posted by Global Tourism Institution at 13:00