The Official Communique of the Press Office of the President of European Council on Tourism and Trade had made public the status of the candidatures for World Best Tourist Destination and for World Capital of Culture and Tourism competition for 2015.

We are presenting the main elements of the Press Release of European Council on Tourism and Trade.

The full document can be downloaded from here:European Council for Tourism and Trade

WORLD BEST TOURIST DESTINATION AWARD had become a center of international tourism recognition in the last span of time.

After obtaining the highest world tourism accolade in 2012, the nation island of Trinidad and Tobago becomes the only Caribbean nation that registered tourism increase in the region.
In 2013 People Democratic Republic of Laos registered a plus of over 1,5 million tourists in the first year and a 7% increase in GDP, due to mounting tourism revenues and Zimbabwe: the 2014 winner rose from zero to hero, in tourism statistics after snatching the world best tourism destination designation.

This string of tourism success stories made 29 countries to start registering their candidatures for WORLD BEST TOURIST DESTINATION AWARD in 2015 more early than ever.

Already countries from Central and South America had put forward their touristic potential with a mind blowing extravaganza at Intercontinental Hotel in Bucharest where eight Latin American and Caribbean countries outlined their touristic, artistic and cultural potential for European Council on Tourism and Trade election committee.

ECTT President Anton Caragea highly praised their demonstration as a perfect display of Latin American cultural and touristic prowess that will be seriously regarded by the prize committee. 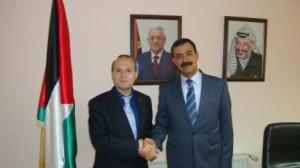 Middle Eastern countries have outlined also their fantastic touristic and cultural potential with: Turkey, Egypt, Palestine and Jordan in the vanguard of outlining their powerful cultural asset and explaining their security measures put in place to make tourism feel safe and secure and enjoy a well deserve vacation on sandy beaches of Sharm El Sheik or Alexandria of Egypt, discovering ancient cities of Petra and Jerash in Jordan or the Cappadocia coast in Turkey.

The Central Asian countries tourism potential is expecting to be discovered by the Kazakhstan candidature that is bringing the potential of Caspian Sea, the beauty of Astana-the XXI century capital of the country and the impressive historical legacy of Turkestan-candidate city to WORLD CAPITAL OF CULTURE AND TOURISM IN 2015.

Kingodm of Jordan has high hopes in being elected as World Best Tourism Destination in 2015.

In total an initial number of 29 country early bird registered their candidatures, appreciated Mrs. Teodora Nicolae-press officer ECTT and we are expecting that by the end of January 2015, when we will close the registration process we will have even more candidatures.

In total 14 cities and region`s from across the globe, aspire for the world famous designation.

Professor Dr. Anton Caragea had stated that: the evaluation process is already started and it is an ongoing research and decision activity.

We will have also countries that will be approach by us, to take part in the selection process, in order to obtain a balanced geographical distribution of the winners of WORLD BEST TOURIST DESTINATION and we will consider as always where we can have the biggest impact in promoting a new destination like in Trinidad, in promoting rural and social tourism, like in Lao PDR or rebranding a country and reasserting it in the world tourism field like in Zimbabwe case.

We hope that we will have the same global impact and weight in promoting new emerging destination`s and in asserting cultural tourism role and importance. Culture and social benefits of tourism are encapsulated in our attention, concluded President Dr. Anton Caragea his evaluation of 2015 candidatures for WORLD BEST TOURIST DESTINATION and WORLD CAPITAL OF CULTURE AND TOURISM.

Let`s wish good luck to all the contenders!
Posted by Global Tourism Institution at 08:24 No comments:

MR. DELEANU VICTOR IS CROWNED AS BEST WINE MAKER FOR 2014

On 6 December 2014, on the ceremony to present the Best European Wines and on the venue for unveiling the DIPLOMATIC WINE for 2015, Mr. Victor Deleanu-Chairman of the COTNARI-House of Wines, the author of the European wine`s ilk’s revolution, received in a festive ambiance the title for BEST WINEMAKER OF THE YEAR.

Chairman Victor Deleanu is recognized as the BEST WINEMAKER OF THE YEAR (2014).
Over 20 diplomats from three continents, plus European and Romanian officials and European parliamentarians where present on the venue in order to try out the wines created by the oenological specialists of COTNARI- House of Wines, wines crowned as the DIPLOMATIC WINE of 2015.
Professor Dr. Anton Caragea, President of European Council on Tourism and Trade has complimented the exertions of Chairman Victor Deleanu to promote the European wines, wines of exceptional quality thru the world and his decision to unleash the revolution of the European traditional wines assortments.
This wine revolution hopes to place in the first rank of the wine making process the assortment of the grape, the aroma and the persistence naturally present in the Europe and Romanian wipe grapes.

One of the creations of Mr. Victor Deleanu-Grasa de Cotnari (Fat Lady of Cotnari) is universally recognized as a perfect wine.
Based on this grapes, exceptional wines can be carved out, this is the manifest credo of the owner and wine creator of Cotnari-House of Wines-Mr. Victor Deleanu, creed validated by the election of his wines as the BEST EUROPEAN WINE for 2015-DIPLOMATIC WINE.
COTNARI-HOUSE OF WINES is an ambitious project that is encompassing a plantation with total of 350 hectares, out of which 100 hectares are cultivated with the famous Romanian grape variety: Feteasca Neagra(Black Girl), the Busuioaca de Bohotin(Bohotin Basil) , world celebrated for his unique flavour is cultivated on 75 hectares, the Tamaioasa Romaneasca (Romanian Incense Flavour) favoured by the connoisseurs for his strong taste, unique palates, can be found on other 75 hectares, Feteasca Alba(White Girl) is produced on 50 hectares and the Grasa de Cotnari ( Fat Lady of Cotnari) assortment , which is on good reason named as the Romania treasure and is comprised in natural patrimony, is cultivated on 50 hectares.
In order to properly recognize this serious, constant and sustained line of achievements, it was normal that the BEST WINEMAKER OF THE YEAR title to be awarded to oenological team from COTNARI-House of Wines lead by Chairman Victor Deleanu.
In the thunderous applause’s of the diplomats and official`s present at the venue, Professor Dr. Anton Caragea, President of European Council on Tourism and Trade had conferred the designation of BEST WINEMAKER OF THE YEAR to the Chairman of COTNARI House of Wines, for his exertion in promoting wine culture and the specificity of European wines.
Posted by Global Tourism Institution at 03:50 No comments:

The unveiling of the title for WINEMAKER of THE YEAR for 2014 and the public presentation of best European wines had succeeded in gathering in the same spot the wine connoisseur’s community of Europe, Romania and the entire world on the venue of the International Wine Fair.

George Malutan is the official WINEMAKER OF THE YEAR
Diplomats from Europe, Asia and Africa, members of European Council on Tourism and Trade, European Bank for Reconstruction and Development and countless personalities had convened on the spot, eager to know the names of 2014 best of wines and their makers.
The organizers decided that: the name of the BEST WINEMAKERS should be accompanied by the tasting of their prized creations.
The award ceremony and the tasting session had commenced by a Feteasca Neagra (Black Girl) from Dominium series of Cotnari House of Wine, a perfect red wine that encompassed with distinction the work of the wining George Malutan, the winner of WINEMAKER of THE YEAR designation.

Mr. George Malutan had proven himself by long term and successful efforts in creating COTNARI-Hose of Wine products.
Wines such as the Feteasca Neagra, had conquered the hearts and mind of diplomats at the DIPLOMATIC WINE contest for 2015, but also Mr. Malutan creations won many gold and silver medals, in the last span of time in International Wine Contests and tasting ceremonies. All this achievements bestow a perfect international recognition for his wines created for the portfolio of COTNARI House of Wines.
Professor Dr. Anton Caragea, President of European council on Tourism and Trade had eulogized the wines created by Mr. George Malutan as perfectly capturing the terroirs specificity of Moldavia-region of Romania and european traditions and respecting the long lasting tradition of wine making of the areas.
His creations are garnering the art of wine production together with the latest technologies specific to the New World wines.
The result is a perfect calibrated wine, this is a living proof that old European wineries can be still seductive created with the new technologies and can lead in the world top of wines.
European wines did not said their final word on the world stage, concluded Professor Dr. Anton Caragea.
The wine maker for COTNARI Hose of Wines-THE BEST WINEMAKER OF THE YEAR, Mr. George Malutan had inscribed in his wall of trophy’s the promotion of specific Romanian wines such as: White Girl (Feteasca Albă) and Black Girl (Feteasca Neagră), Fat Lady of Cotnari (Grasa de Cotnari) benefiting by a unique aroma and taste and aromatized assortments such as: Romanian Incense (Tamaioasa Romaneasca) and Bohotin Basil (Busuioaca de Bohotin).
Posted by Global Tourism Institution at 03:43