On the occasion of WORLD BEST TOURIST DESTINATION 2014 elections, the Academic Board of European Council on Tourism and Trade has decided to co-opt as his newest honorary academic member- Mr. Walter Mzembi, Minister of Tourism and Hospitality Industry of Zimbabwe. 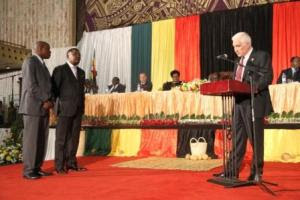 After being voted as WORLD BEST TOURIST DESTINATION FOR 2014, Zimbabwe has become the first African country to hold this honor, a sign of African resurgence and of closer ties with Europe.

The decision to award the HONORARY ACADEMICIAN TITLE has come not only after the successful Zimbabwe bid for WORLD BEST TOURIST DESTINATION AWARD, but in recognition of the extensive academic activity realized by Minister Walter Mzembi in the last span of time.

From the large list of academic qualification of Mr. Walter Mzembi the academic committee has appreciated his studies in: Mechanical Engineering, Diplomas in Business and Governance Studies (USA), Business Administration and Doctorate in management (Mexico) etc.

The decision was taken in consensus on 3rd of May 2014 and was communicated to Minister of Tourism and Hospitality Industry of Zimbabwe-Mr. Walter Mzembi in Harare on 29 May 2014.

The official handing out ceremony was part of WORLD BEST TOURIST DESTINATION FOR 2014 and was conducted by the Director of European Tourism Academy-Academician Professor Dr. Mircea Constantinescu.

In his welcoming speech in the European Academy, Professor Mircea Constantinescu has praised the first African leader accepted in the European Academy-Minister Walter Mzembi: Dr. Walter Mzembi is at the same time a great patriot. He loves his country, Zimbabwe, and the people of Zimbabwe. He put his enthusiasm, energy and knowledge in making a better life for the people and promoting the image of his country all over the world (…..)

Dr. Walter Mzembi is a born communicator and diplomat. And this is not a pure laudation. The recognition of his merits in this area are confirmed by the appreciation of the Institute of Public Relations, by the African Travel Association, by the United Nations World Tourism Organization, by the Institute Of Cultural Diplomacy, and by many other national and international professional bodies.

Professor Mircea Constantinescu is offering the welcoming presentation for the first African leader accepted in the European Academy-Minister Walter Mzembi.

In the end of the ceremony Senator Ionel Agrigoroaei handed out the academician insignia and European Council on Tourism and Trade President-Professor Dr. Anton Caragea invited the new academician Walter Mzembi to take his place amongst his peers.

After being nominated as Academician- Honorary Member of European Tourism Academy Mr. Walter Mzembi becomes the voice of African continent in relation with Europe and in the world tourist stage opening the gates of prosperity and recognition for his fellow ministers from Africa and creating new opportunities of engagement between Africa and Europe in tourism, culture and economic cooperation.
Posted by Global Tourism Institution at 10:59 No comments:

The Press Office of the European Council on Tourism and Trade is announcing that fallowing the familiarization and evaluation trip to Zimbabwe two new hotels has being added to the list of TOP LUXURY HOTELS: Meikles and Victoria Fall for their long history of achievements and is encouraging all the traveler`s interested in discovering Africa to visit Zimbabwe-World Best Tourist Destination in 2014 and to benefit the best’s hotel’s that Africa is having to offer: Meikles Harare Hotel and Victoria Falls Hotel in Victoria.

On the occasion of Zimbabwe familiarization trip for European Council on Tourism and Trade Organization (ECTT), the director of hospitality and amenities department of ECTT: Mr. Ioan Matei has assessed the accommodation, amenities and tourism facilities existent in Zimbabwe.

Zimbabwe is WORLD BEST TOURIST DESTINATION IN 2014! Come an visit !

As a result of this first hand observation, for a period comprised between 29 May-7 June 2014, ECTT department of hospitality and amenities is recommending as ones of the best African hotels, offering luxurious condition and a perfect structured management: the Victoria Fall Hotel in Victoria Falls and Meikles Hotel in Harare (part of The Leading Hotels of the World).

Victoria Falls Hotel-one of the Best Luxury Hotels in Africa

The two hotels are fully complying with international standards, are offering luxury and full five stars commodities, safety and large are of opportunities for a lavish stay in the heart of Africa: Zimbabwe.

As the country was named as World Best Tourist Destination in 2014 is expected to receive in the next two years large number of international tourists, and the need for recommendation of luxury hotels is in full spring.

Victoria Falls Hotels is priding himself as having 180 rooms decorated in a manner that recaptures the comfortable charm of a bygone age, with colonial prints, four-poster and canopied beds, antique furniture and well-chosen artifacts. Modern facilities and amenities mingle well with the old-fashioned ambience, including such 21st century travellers’ necessities as personal safes, minibars, bathrobes, digital satellite television and even umbrellas for the convenience of guests visiting the Rain Forest surrounding the Falls. Deluxe Rooms and Suites in the original section of the hotel offer breathtaking views across the deep Zambezi River gorge to the Victoria Falls Bridge and the spray of the Falls.

The home of choise for royalty for the last 100 years: VICTORIA FALLS HOTEL

Victoria Falls Hotel has being home for more that 100 years to the royalty of Europe, their list of guests in this period being a true who’s who of the world.

The second recommended luxury establishment is Meikles Hotel in Harare that is celebrating a 100 year history and has always envisioned a commitment to the “highest possible standard of service and product” – something that has become enshrined in the Meikles culture. It has always been an iconic landmark of capital city Harare, one which has constantly and gracefully evolved through the colonial era of Rhodesia into modern- day Zimbabwe. Its position in the heart of the city has allowed its walls to bear witness to many events that have shaped the Zimbabwe’s past.

Today Meikles-Harare is offering an atmosphere steeped in history, combining the charm of the old with the comfort and convenience of today.

The team of ECTT is warmly congratulates the two hotels: Meikles and Victoria Fall for their long history of achievements and is encouraging all the travellers interested in discovering Africa to visit Zimbabwe-World Best Tourist Destination in 2014 and to benefit the best’s hotel’s that Africa is having to offer: Meikles Harare Hotel and Victoria Falls Hotel in Victoria.

Posted by Global Tourism Institution at 10:55 No comments: