On 11th of August 2014 President Dr. Anton Caragea had offered an interview regarding his recent trip to Zimbabwe and stated that:

Our familiarization trip has in his core to express our support for the incredible development of tourism in Zimbabwe under the care and benevolent support of H.E President Robert Mugabe, the celebrated African hero and with the efficient and lofty supervision of Minister Walter Mzembi and Tourism authority of Zimbabwe chairman- Karikoga Kaseke declared H.E. President Anton Caragea.

Our fact finding tourism mission must also mark the start of rebuilding European-Zimbabwe relations, the end of the futile and unnecessary sanctions and to mark the fact that tourism in Zimbabwe is the perfect, safe, luxury and ideal vacation spot for all the world tourists.

After our visit and after receiving the world highest tourism honor the tourism in Zimbabwe has become world recognized, perfect placed in the world spotlight and all the tourism agency has already started or will soon start to include in their travel program the perfect scenic destination of Zimbabwe.

We succeded in ending the separation between tourism community and in a few years Zimbabwe, if continues the policy of President Robert Mugabe and Academician Walter Mzembi will surpass all the tourism competitors in the region.

The days of betterment and perfect development of tourism in Zimbabwe are right ahead concluded European Council on Tourism and Trade`s President his report over his visit to Zimbabwe-the gem of Africa- WORLD BEST TOURIST DESTINATION IN 2014.

The European Council on Tourism and Trade high level delegation has toured Zimbabwe-WORLD BEST TOURIST DESTINATION IN 2014 in order to express the European support for the development of tourism industry in Zimbabwe and clearly mark the fact that Zimbabwe has developed into the epitome of high class tourism in Africa.

The visit made between 28 May-6 June 2014 by an European delegation headed by H.E. Professor Dr. Anton Caragea, President of European Council on Tourism and Trade was destined to restart the bilateral relation between Europe and the Republic of Zimbabwe and the southern region of Africa, a region in full economic development and with a long tradition of partnership with our country. 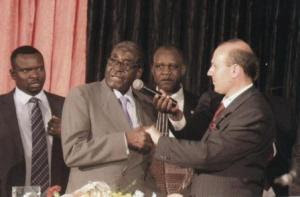 President Robert Mugabe express his gratitude for Professor Dr. Anton Caragea continuous support in promoting Zimbabwe integration in international tourism arena and stated than: when others where plotting to punish us you think at rewarding us and make us friends. From the profundity of our heart: Tank you Professor !

As we do not forget the word of reconciliation spoken after this years of struggle, ten years before Nelson Mandela similar example: “If yesterday I fought you as an enemy, today you have become a friend,” “If yesterday you hated me, today you cannot avoid the love that binds me to you.”

We will never forget that 35 years ago from Harare you have called all nations of Africa to wake up from the long colonial sleep to a new and rich life of fulfillment`s.

Your name is and will be forever inscribed for me and for all the honest people of the world along the names of the fathers of free Africa:Kwame Nkrumah, Julius Nyerere, Jomo Kenyatta etc. as a giant of liberation and freedom fight in Africa and the world. 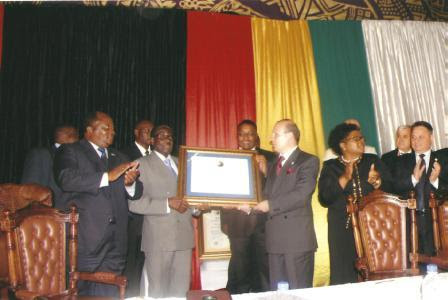 During the discussion, foreign policy cooperation, opening of honorary consulates and economic cooperation councils as well as economic and investment opportunities where tabled offering opportunity for European countries to take part in the business boom and bonanza of southern region of Africa and specially the Republic of Zimbabwe buoyant economic environment.

The European delegation enjoyed a sophisticated cultural program with visit to the History Museum of Harare, National Heroes Acre and to the wonderful UNESCO heritage site of Great Zimbabwe-the largest African palatial complex dating from XII century and covering 700 hectares and a chance to discover the world greatest cascade: Victoria waterfall.

The high level visit, the first after a 25 year hiatus in bilateral relation offered to the parties the opportunity to table concrete cultural, tourism and cooperation projects and to highlight the bilateral support for the development of the social and political cooperation.

The Republic of Zimbabwe becomes now the main political and strategic partner in the region of southern Africa, offering innumerable opportunities for developing friendly ties.

In the heart of Great Zimbabwe historical complex

Elephant safari in the desert heart of Zimbabwe 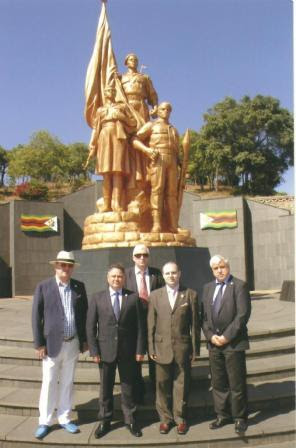 Posted by Global Tourism Institution at 00:30

Email ThisBlogThis!Share to TwitterShare to FacebookShare to Pinterest
Labels: President of European Council on Tourism and Trade