On the occasion of European Council on Tourism and Trade General Meeting for 2015 the participants will have the opportunity to watch the best travel documentary of 2014, a production of Laos National Television, presenting the World Best Tourist Destination Award ceremonies, held in May 2013 in Vientiane.

The announcement was made by Mr. Nicoale Nicolae, media director of European Council on Tourism and Trade in the presentation of the high awaited event that will take place at the end of the month. 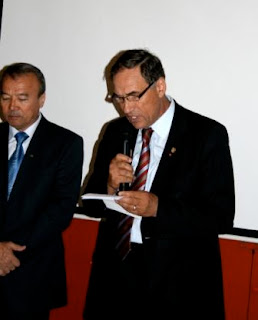 The documentary was broadcasted only in 2014 in 2015 by 28 televisions and watched by more than 20 million viewers.

From 25 june 2015 the documentary will be available (in selections) for the general public to see at European Council on Tourism and Trade channel here.

“Laos-World Best Tourist Destination-Unveiled” is a 122-minute travel documentary film, which premiered at the Vientiane World Travel Awards in May 2013.

Since then, it has won six international awards, most of which were first prizes in the best travel documentary category.

The art show is presenting the most striking features of Laos-World Best Tourist Destination declared by European Council on Tourism and Trade showcasing the rich history and cultural patrimony of the country, the fashion of past and present Laos people and minorities and different regions of the country, finally culminating with a parade of artists presenting national Lao music and international acclaimed artists.

Posted by Global Tourism Institution at 02:04